Reylan is my new Lore Master in LotRO. For some reason Versona wasn’t really working out for me, but I seem to like this guy. I’m still not overly fond of the crowd control type classes, but I like that I can summon animals. I figure I’ll keep this guy on the back burner to play with my son when he’s online. 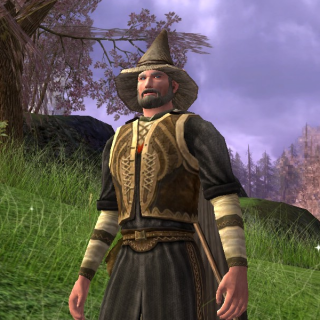 Reylan’s name comes from the fantasy world I created for my D&D campaign. Reylan is the name of the continent which the campaign is based. In keeping with this, I’ll be naming his animal companions after the various nations which make up the continent of Reylan. His first is the raven Dynthgar. Dynthgar is the ancestral home of the dwarves (where an ancient nation of dwarves still stands).

Reindert, to me, is an iconic character. He represents some elements of my own personality which I find essential in defining who I am. He is whimsical, intelligent, and not entirely in touch with the world around him. Before LotRO, he started out as a D&D character. The group needed a cleric, and I had never played a cleric but wanted to try it out. But I wanted to try something… weird. The 2nd edition rules allowed for something called ‘variant priests” which had slightly different rules than the standard clerical types, mainly due to the worship of strange deities or of forces of nature. Having just read through the nine alignments, particularly that of Chaotic Neutral. While I now regard the definitions presented as silly at best (idiotic would be a closer assessment), CN gave me a laugh and I wanted to try playing such a character. With permissions from the DM (who must have been similarly silly or idiotic), I made Reindert Groth, my priest of chaos.

The game was a blast, and despite my unusual antics (and sometimes because of them), our adventuring party survived every encounter. In fact, the only time we ever needed to have any resurrected was after the week I missed a session, proving the team literally couldn’t live without me. Time passed, as it does, and the campaign came to a close.

Years later, I was given an opportunity to once again play my favorite cleric, but as this DM was unwilling to permit a creation of new rules just for me (how unsilly of him), I decided to reinvent the character. This time, instead of being a human cleric, I chose half-elven bard. Why the change? Well, for one I love bards. For another, when playing Reindert originally, he played like a jack-of-all-trades, and dabbled (or attempted to) in some of the skills which other classes are more known for. Also, for once in forever the group wasn’t entirely non-human. The only reason Reindert was human in his first incarnation was because I had never seen any, ever, play one. This time around, we had plenty. Unfortunately this campaign never really took off, and neither did several others in which I attempted to re-play my famous loony healer.

Years later, again, I find myself playing LotRO. While it’s not at all D&D, it is a fantasy game, and one which combined the best parts of D&D’s cleric and bard into a single class: the minstrel. So here he is, Reindert Groth, an elf raised among the humans of Bree.