Here is Dust Raven, my main on Justice, in his “tights” costume. Dust Raven is just as comfortable fighting crime in his normal street clothes as he is in any sort of uniform, but for when it matters he has this outfit for when he needs to be seen by the public.

Nobody’s Side is a super group on the Justice Server of City of Heroes. It originally started as a place to keep various alternate characters who didn’t belong in Star Patrol specifically, but wouldn’t be played often enough to warrant joining other groups. It eventually developed into it’s own “group” of character who, for their own reasons, don’t affiliate themselves with any other group of heroes or villains. The following characters are piloted by @Dust Raven (with the exception of Copper Cat, who is piloted by @Dust Raven 2).

Last October I opted to re-roll my namesake character in City of Heroes. Once again he is seeing a shift in ability and focus within the game, and even now I’m sure this will not be the last. This time I waited until I was satisfied with the new and latest version of Dust Raven before mentioning him here. So far he’s seen over a dozen rerolls within the game, with versions of him currently stretched out over four servers, so I see little point in bringing attention to a version I’ll end up abandoning. This latest version, a Kinetic Melee/Willpower scrapper, is currently level 50, with all of the currently available incarnate slots unlocked and slotted. So far this version is the most fun to play, either solo or in a group. This is true of not just the previous versions of him, but of all my characters. I may still create additional versions of him, but this one I’m definitely keeping.

Like the last reroll, this Dust Raven is from Praetorian Earth. Although his family had ties to the Syndicate, he attempted to break away and become his own man by joining Powers Division rather than becoming just another thug in the “family business.” Unfortunately, Powers Division didn’t offer him the freedom he was seeking, and so became a thug for the state rather than his family. As his disillusionment with the system was taking hold, he was contacted psychically by Penelope Yin, a childhood friend of his before she was taken to become a seer (as was one of Dust Raven’s sisters). Through Penny, Dust Raven learned more about the corruption within Cole’s regime and eventually about the coming war between Praetorian and Primal Earth. Ultimately he left Praetorian Earth to seek a way to make piece between his world and the other (mainly because the narrative presented leaves you no choice).

In Primal Earth, Dust Raven’s selfless acts of heroism and fearless devotion to protecting others quickly gained him a reputation as a superhero through Paragon City, despite his refusal to associate with any of the groups of registered heroes throughout the city. He would join temporary teams and alliances with other heroes, and sometimes villains, in order to promote the greater good. Given his past experiences with more permanent membership in groups such as Powers Division and the Syndicate he prefers to remain unaffiliated groups in general. Instead he prefers to make friends with other heroes on an individual basis.

Dust Raven and his new Image of the Well pet (reward for the recent loyalty subscription). 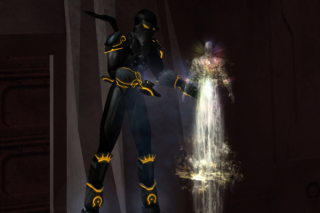 Here are some new outfits I’ve created for my City of Heroes characters on the Justice Server:

Dust Raven has been my namesake character, and general online persona, since I first logged on the Internet. It should be no surprise that I’ve given this character so much attention, and have put a lot of serious effort into making him into a character I truly enjoy playing. He was originally roll-up on Champion as a grav/kin controller, though with most of my friends playing on Liberty or Justice he saw little play. I eventually rerolled him as an illusion/kin on Justice, but the more I played him, the less impact he seemed to have in group play (almost the group I played with regularly did not the core buffs associated with kin, and the occasional strobe effects of illusion presented other problems). So I re-imaged him as a corrupter, which was so successfully he quickly level to 50 and became an incarnate. Unfortunately  just as quickly he became boring to play.

So here I am again with another re-roll. This one’s a little different, in that the “original” Dust Raven, the corrupter, still exists, but has left Paragon City indefinitely. Instead this re-roll is the Praetorian version. He’s still very much the same person, but unlike the Primal, Praetorian Dust Raven takes an active interest in the well-being of others. He’s a team player rather than a rogue. I’m looking forward to seeing how this version of him plays out.

In this version, Dust Raven is a dark/dark blaster. The origin of his powers is the same (summoning dimensional fire), but the effects are different. He’s currently out of Praetoria, and a member of Nobody’s Side, though he may end up in Star Patrol as time goes by.