A long, long time ago…

Fox Girl was one of my just for fun characters who quickly turned into one of my favorites to play. She has a few false starts but I kept re-rolling her for whatever reason. The original version was named Kitsuneko, a claws/regen scrapper on Justice, but at the time I had other characters who wanted my attention (such as my main characters in Star Patrol). Kitsuneko also had a problematic appearance, as she was rolled before there were animated tails. Once those tails were wagging she came back again, but found I had other priorities again as everyone wanted to play in the also new Praetoria of the Going Rogue expansion. So I rolled her up again as a Pretorian, this time as a claws brute. This time I had perfection, and next thing I knew she was level 30 and leaping around Paragon City as my main who wasn’t 50 yet. Several costume changes and a few super groups later, she finally reached the level cap but never ascended because… well, time ran out.

New pages have been added with the current roster of character in the various super groups I play in on City of Heroes. You can find these pages on the right, or select from one of the links below:

Dust Raven has been my namesake character, and general online persona, since I first logged on the Internet. It should be no surprise that I’ve given this character so much attention, and have put a lot of serious effort into making him into a character I truly enjoy playing. He was originally roll-up on Champion as a grav/kin controller, though with most of my friends playing on Liberty or Justice he saw little play. I eventually rerolled him as an illusion/kin on Justice, but the more I played him, the less impact he seemed to have in group play (almost the group I played with regularly did not the core buffs associated with kin, and the occasional strobe effects of illusion presented other problems). So I re-imaged him as a corrupter, which was so successfully he quickly level to 50 and became an incarnate. Unfortunately  just as quickly he became boring to play.

So here I am again with another re-roll. This one’s a little different, in that the “original” Dust Raven, the corrupter, still exists, but has left Paragon City indefinitely. Instead this re-roll is the Praetorian version. He’s still very much the same person, but unlike the Primal, Praetorian Dust Raven takes an active interest in the well-being of others. He’s a team player rather than a rogue. I’m looking forward to seeing how this version of him plays out.

In this version, Dust Raven is a dark/dark blaster. The origin of his powers is the same (summoning dimensional fire), but the effects are different. He’s currently out of Praetoria, and a member of Nobody’s Side, though he may end up in Star Patrol as time goes by.

Presenting Agent Rosencrantz! I transferred Rose to Justice from Protector when CoH:Freedom went live. His original name was Flamestrike. The concept for the character actually comes from an NPC I used for an old Rifts campaign. The general idea was a guy who turned to human augmentation as a means of survival and revenge after his family (and entire town) was killed by monsters. The end result was a somewhat loopy/zany fun-loving guy who could suddenly turn wicked scary in the blink of an eye. I think I’ve captured that in Flamestrike/Rosencrantz.

The name “Rosencrantz” comes from a mercenary (with a love of Shakespeare) who could never get remember the real names of anyone, and thus gave them nicknames.

Here is an updated roster of my characters in Star Patrol:

Agent Lambert is my newest City of Heroes characters, and the newest member of Star Patrol. I’m working out the details of his background, but in short he’s a member of the “nuclear ninety” and has powers similar to Fusionette. Unlike Fusionette, he is also able to use his energy emission powers to accelerate healing in himself and others, as well as bolster the body’s natural abilities. 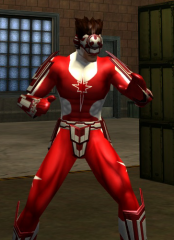