Drostan is a reroll if one of my earlier toons, Agent Caedmon. Agent Caedmon was a Seelie Court elf who entered Paragon City via Croatoa and eventually joined Star Patrol. In fact, the joining of Star Patrol (which was decided upon during his creation) was the only reason he had “Agent” in his name. Eventually I decided I’d rather just name him Caedmon. Unfortunately, by the time I felt I could to pay for a name change, that name has already taken by someone else. Having already arranged for a rename, I opted for Nuadu, a variation of Nuada, king of the Tuatha de Dannon (prior to Bres taking over after Nuada was forced to step down after losing an arm in battle). This is a cool name, but I was never really happy with it.

After fretting over it for nearly a year, I’ve decided to simply reroll him entirely, changing is power sets around a bit to better fit him conceptually. I still can’t get the name Caedmon, but I came up with Drostan, which is another period name which suits him. 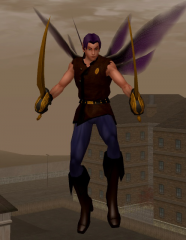 Drostan is an elf and an agent of the Seelie Court. Although he is related to the Tuatha de Dannan which have invaded Croatoa, his clan is descended from Nuada rather than Bres. The original war between the Tuatha de Dannan and the Fir Bolg ended thousands of years ago and Drostan and his people consider the displaced Tuatha de in Croatoa to be cursed. Unfortunately, this cursed and “false war” is starting to spill over into the rest of the faerie realm and is threatening to engulf all of the Tuatha de.

Seeking a way to rid the faerie realm of this senseless conflict, Drostan came to Earth in an attempt to discover its cause. Upon arrival he found that not only was his realm in danger, but Earth as well. Not wishing to doom another world to save his own, Drostan is now searching for a way to end the conflict, or at least contain it in a way that will keep it from spreading.

While exploring the town of Salamanca in Croatoa, Drostan came upon Agent Bowman, leader of a group called Star Patrol. Bowman was also learning of the Tuatha de Dannan/Fir Bolg conflict, and was concerned with how it may affect Earth. After a short discussion, both agreed an alliance would benefit both in dealing with the war. Since joining Star Patrol, Drostan has expanded his duties to protecting the surrounding areas on both sides of the veil between Earth and the faerie realm.